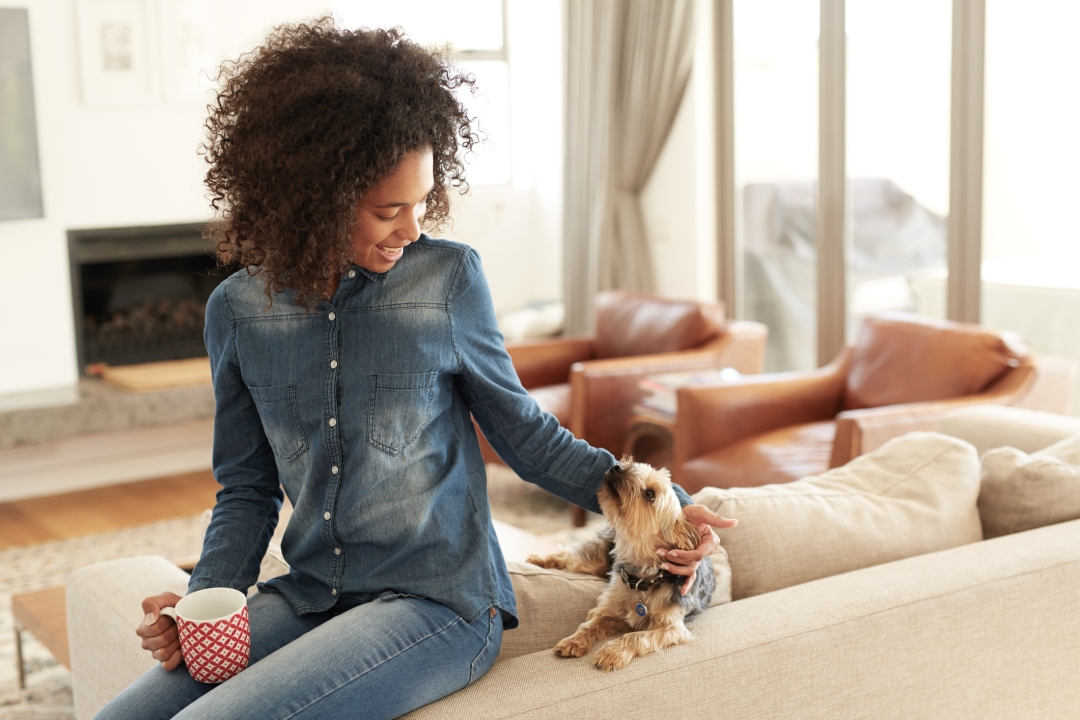 A New Leash on Life

I don’t know about you, but I absolutely love dogs. It doesn’t matter what breed, size or age – they make me feel blissfully content and never fail to elevate my mood. I’m convinced that those male dating coaches who advise men on how to pick up women by walking cute dogs in the park, had women like me in mind. I’ll approach a complete stranger at a cafe, or on the street, just to engage their canine companions. I’m an equal opportunity animal lover, but if I’m being 100% honest, cats just don’t do it for me like dogs do. Cats always seem so aloof, so emotionally unavailable, that they

represent men that I’d never date or friends that I wouldn’t mind losing. Dogs, on the other hand…well, there’s just something so pure about the raw expression of their needs, that they just seem so…honest to me. They’re often loyal to a fault, and the majority that I’ve come across, just love being loved. Luke Skybarker*, my German Shepard/Lab mix, lives to please and protect my family. He’s a “working dog.” One that’s been bred with a distinct purpose in mind, whether that’s herding animals or protecting its home and family. I cherish him, and, also, Jimmy Chew*, my chihuahua/terrier mix, although, he serves a completely different emotional purpose. His canine footprint is tiny, but his presence is large. I adopted him from a shelter, and lore has it that he was abandoned with his litter mates in a dirty barn somewhere in Modesto, California. I fostered this feral little dog, and he imprinted upon me like a newborn duckling, totally at the expense of loyalty and affection for the rest of my family, and feels no shame in his lack of familial warmth for everyone else. They could move out of the house tomorrow, and he wouldn’t miss a bark or experience the feeling of loss for the very people who keep him alive. Out of all the things that he’s expressed, he’s made one thing quiet clear: he’s a one woman dog. I guess this makes sense: The Maya used to view the ancient predecessor of the Chihuahua as guardians of the afterlife, and would often kill dogs after their owner’s death, and bury them alongside their masters, so that they could accompany them into the next world.  Frankly, I think this ritual wasn’t spiritually based, but, rather, recognition that no one else could command respect from these mercurial, little buggers and deal with them after their owners had passed. It was more of a mob clean up job, than an act of spiritual elevation. If nothing else, the chihuahua is a “ride or die” companion.  If I was bedridden with an illness, or stricken with a life threatening disease, I know that I would never be left alone with little Jimmy Chew in my life. Whichever the dog, or strange peculiarity of the breed, I am so grateful that they play such a selflessly pivotal role in my happiness and well-being. I hope that I do the same for them.

*I’ve changed the names of my dogs in order to protect the guilty.

additional articles on the health benefits of dog ownership:

10 Scientific Benefits of Being a Dog Owner, Mental Floss: http://bit.ly/MentalFlossDoggydog

The Ten Health Benefits of Dogs (And One Health Risk), Huffpost, http://bit.ly/huffpodoggydogs

More Evidence that Owning a Dog is Really Good for You, Time, http://bit.ly/Doggydogs

Hello and thanks for stopping by! This site is written and maintained by Lulu, my childhood nickname. I write this blog from the San Francisco Bay Area, and I welcome any suggestions or comments. Feel free to reach out! I'm very responsive and happy that you've stopped by. View all posts by Stella